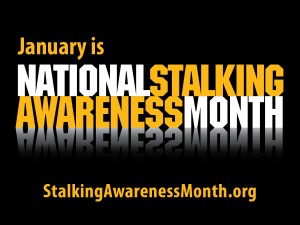 January is National Stalking Awareness Month, a time to focus on a crime that affect- ed 7.5 million victims in one year. The theme—“Stalking: Know It. Name It. Stop It.”—challenges the nation to fight this dangerous crime by learning more about it.

Stalking is a crime in all 50 states, the U.S. Territories and the District of Columbia, yet many victims and criminal justice professionals underestimate its seriousness and impact. In one of five cases, stalkers use weapons to harm or threaten victims,2 and stalking is one of the significant risk factors for femicide (homicide of women) in abusive relationships. Victims suffer anxiety, social dysfunction, and severe depression at much higher rates than the general population, and many lose time from work or have to move as a result of their victimization.4

Stalking is difficult to recognize, investigate, and prosecute. Unlike other crimes, stalking is not a single, easily identifiable crime but a series of acts, a course of conduct directed at a specific person that would cause that person fear. Stalking may take many forms, such as assaults, threats, vandalism, burglary, or animal abuse, as well as unwanted cards, calls, gifts, or visits. One in four victims reports that the stalker uses technology, such as computers, global positioning system devices, or hidden camer- as, to track the victim’s daily activities. Stalkers fit no standard psychological profile, and many stalk- ers follow their victims from one jurisdiction to another, making it difficult for authorities to investigate and prosecute their crimes.

Communities that understand stalking, however, can support victims and combat the crime. “If more people learn to recognize stalking,” said Levette Johnson, Director, MS Coalition Against Sexual Assault, “we have a better chance to protect victims and prevent tragedies.”

Posted On November 23, 2015 ~ 0 Comments
Last fall after the White House launched the It’s On Us campaign, universities, on-campus groups, businesses and other organizations signed their pledge to become involved,…